Early leak detection is vital for distribution systems, with the ability to identify system failure points before they impact customer service levels. When water resources are limited, early leak detection is a valuable tool in reducing non-revenue water and extending pipe asset life. The EchoShore®-DX platform is a fixed leak detection technology that is changing the way water main leaks are identified and repaired.

The EchoShore-DX platform incorporates the latest generation of acoustic sensors that are the result of Echologics pioneering success with correlating leaks on a variety of pipe materials and large diameter mains.  The sensors are built into a standard fire hydrant cap and  are capable of identifying extremely faint acoustical noises emitted by leaks before they become detectable by conventional methods.  This early detection capability enables utilities to prioritize repair based on actual need and the most effective allocation of repair crews.

The platform is designed to provide more accurate information on the location of a leak.  A key advantage of the EchoShore-DX platform is that it performs a system-wide leak detection correlation when first activated. Identifying and repairing any existing leaks enables creating an accurate and known acoustical baseline for the monitoring zone. This results in exceptionally high detection accuracy of any leaks that may develop in the future. 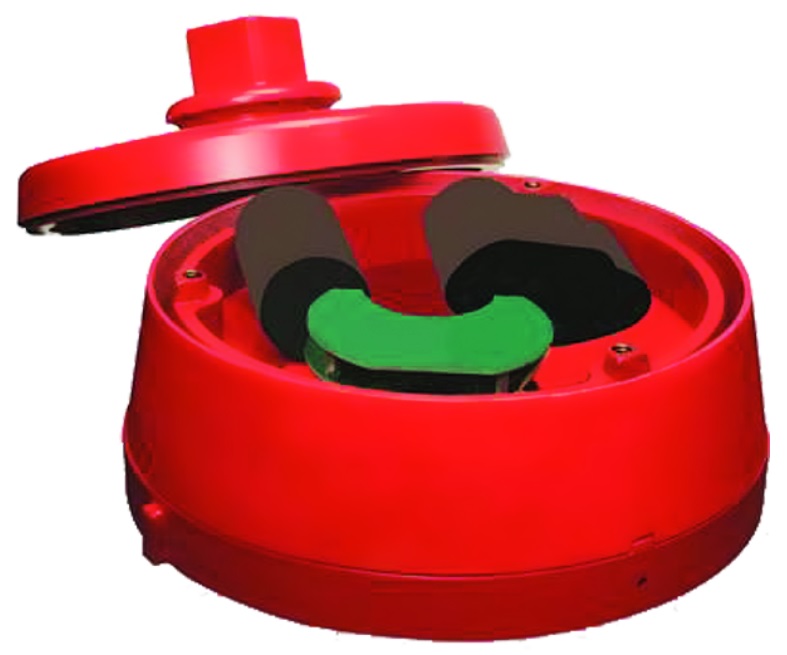 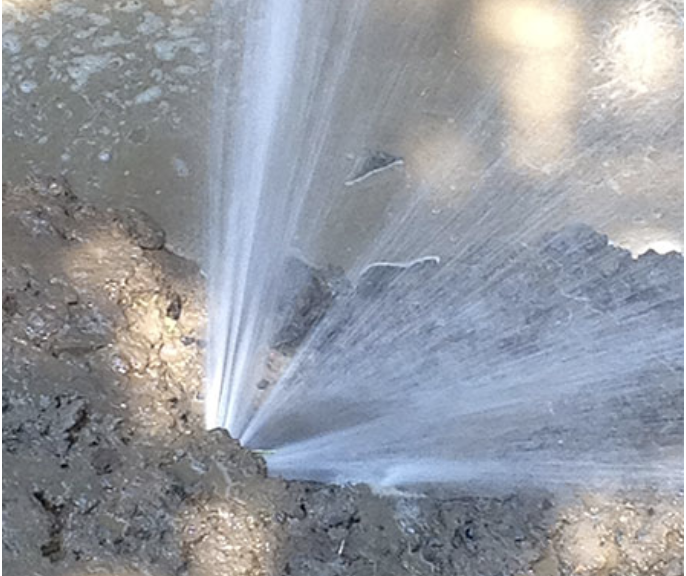 Listen to an audio podcast about permanent leak detection.

How the EchoShore®-DX System Works

At the heart of the platform is an intelligent node which is embedded into a standard fire hydrant cap. The node is pre-assembled and consists of an acoustic sensor, analysis software, network hardware, batteries, and an antenna.

Installation of nodes into a fire hydrant offers several benefits that improve system performance and extends equipment life.  The above-ground location of the node antenna enables a stronger and more stable radio signal. Placing the node in a hydrant cap also offers a better protected installation environment compared to valve box installations that can suffer from salt, silt, and dirt accumulation.

Once a desired monitoring zone is identified, fire hydrants are fitted with nodes which communicate with a central data collection hub. As nodes collect data at predetermined times, proprietary filters are applied and the data is compared to baseline acoustical signatures at each hydrant location. When an acoustical anomaly is identified, the node sends a data file to the multi-channel Echologics Analysis Module (EAM). The EAM automatically requests additional correlation data from surrounding nodes, and automatically performs multiple correlation combinations to accurately target the location of the leak or acoustic anomaly. When a leak is confirmed, a notification is sent to the utility. 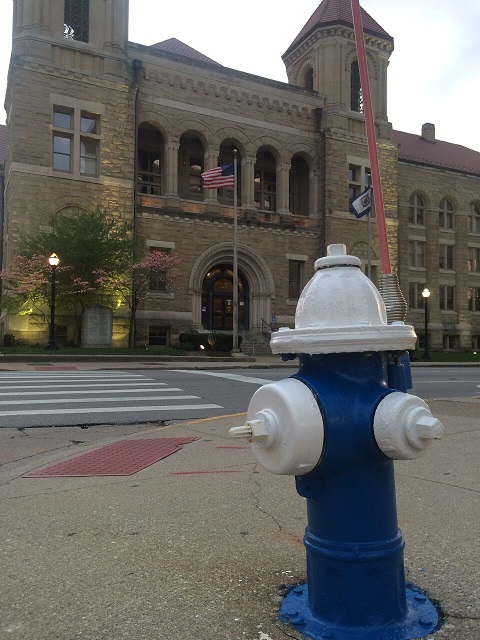 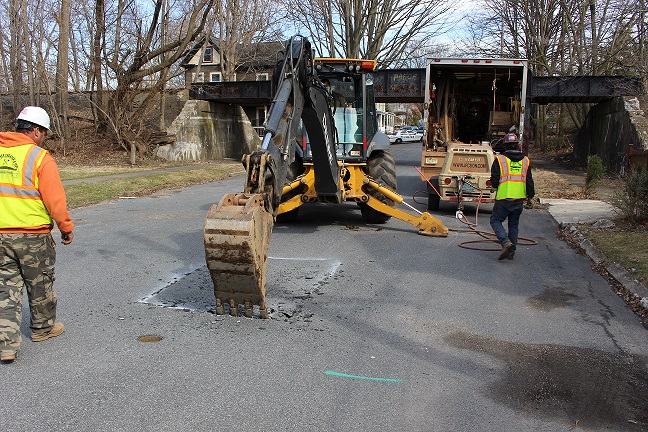 The installation of EchoShore®-DX acoustic nodes on a fire hydrant is a straight-forward process and typically requires less than 30 minutes per site. The nodes are installed in a clean and easy-to- access location.

The first step involves the removal of the existing fire hydrant pumper nozzle cap. For wet barrel fire hydrants, water flow to the hydrant must first be shut-off. 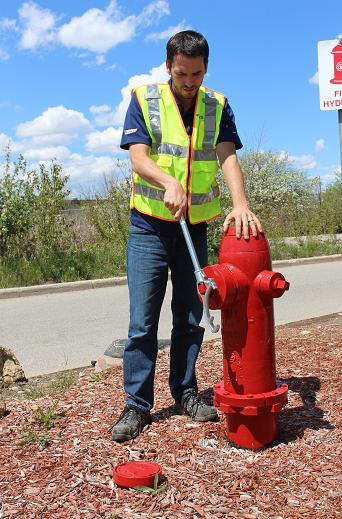 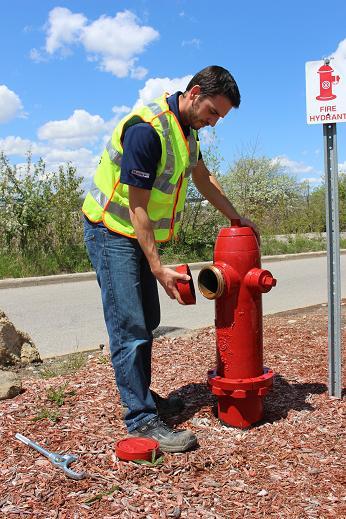 The EchoShore®-DX acoustic node is factory assembled and tested prior to delivery. Once installed, there is virtually no visual difference between the old and new acoustic pumper nozzle cap.

Nodes are made of standard cast iron material and are customizable to meet utility requirements: 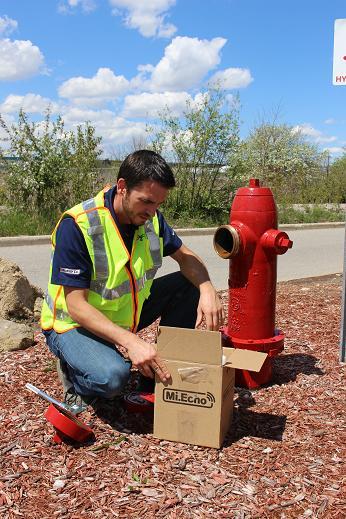 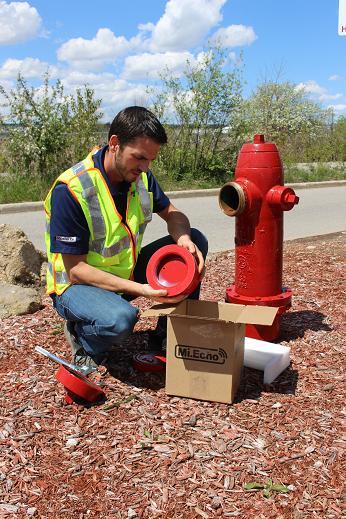 The acoustic nodes have all the required equipment built into the pumper nozzle cap, including an acoustic sensor, electronics board, network hardware, batteries, and an antenna. Once the node is visually inspected, a field engineer fits it to the fire hydrant. There is no impact on the operation of the fire hydrant. 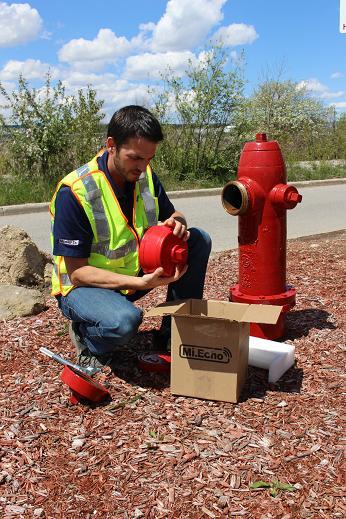 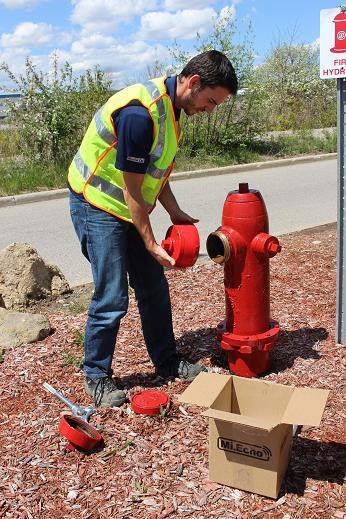 Once the smart pumper nozzle cap is installed, a field engineer activates the acoustic node and links it to the data backhaul network. 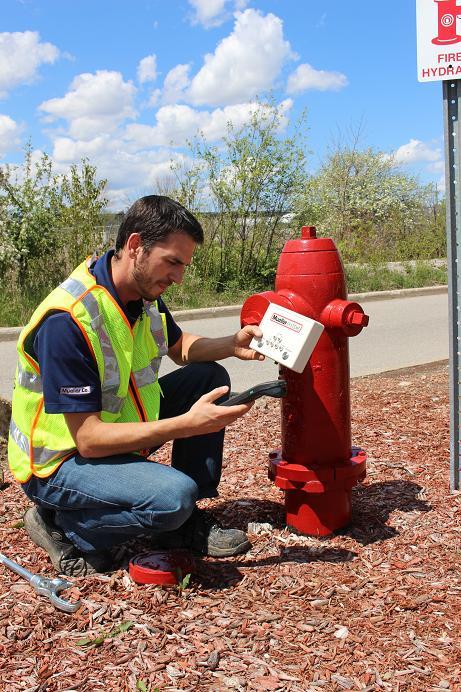 Working with West Virginia American Water, Echologics installed the EchoShore®-DX system in a community with aging pipeline infrastructure challenges. The system identified a leak that could not be located from above ground by field crews. The leak was monitored and observed over a four-week period as it grew in size. Due to the increase in size of the leak, the location was excavated and revealed an aged cast iron pipe with a crack on the bottom of its bell joint. The utility quickly made the repair, and avoided water loss and costly infrastructure damage.

As a result, the utility used the portable leak detection equipment only when reacting to a pipe rupture to confirm that repair crews were digging in the right spot. Medicine Hat searched for a more advanced solution delivering reliable and noninvasive monitoring of their trouble prone older pipelines that also offered the least disruption to residents and businesses, which is what led them to the EchoShore®-DX leak monitoring system.

This technology is a permanent leak-monitoring platform designed for water distribution mains. It features sophisticated acoustic sensors and proprietary processing algorithms to detect and pinpoint the source of faint noises emitted by pipeline leaks — long before they become detectable by conventional detection methods. Battery-powered monitoring “nodes” are built into fire hydrant pumper nozzle caps. They incorporate an ultra-sensitive acoustic sensor enabling the system to identify and locate leaks by correlating, analyzing and comparing data from pairs of adjacent nodes.

The acoustic nodes in the EchoShore-DX system deployed in Medicine Hat are linked using a Bell broadband wireless network, the first wide-scale wireless leak detection project of its kind in Canada. The secure wireless connectivity aids rapid deployment of the platform, enabling operators to perform a comprehensive system-wide leak detection correlation immediately upon initial system activation. Identifying and repairing existing leaks creates a highly accurate and reliable “acoustical baseline” for each monitoring zone that results in exceptionally high detection accuracy of any subsequent leaks that may develop in the future.

Medicine Hat opted for Echologics managed services from Mueller Water Products to support the system’s deployment and operation. The upgraded managed services include an Echologics Leak Operations Center (LOC): a specialized team of pipeline leak-detection professionals that actively monitor leak detection data and notify utility staff in the event of a probable leak on the network.

Two of the detected POIs identified as potential leaks were confirmed with on-site inspections, but the third acoustic POI turned out to be an anomaly that demonstrated the sensitivity and accuracy of the acoustic technology. Investigating field technicians discovered the POI was actually a pressure zone boundary valve that was partially open instead of firmly closed, causing a pressure leak into a lower pressure zone that had

Medicine Hat’s experience with the EchoShore-DX technology has resulted in plans to expand the city’s current leak detection coverage to include their entire metallic and asbestos cement water distribution pipe assets over the next three years. The city’s future capital spending plan includes hundreds of additional nodes for deployment over a three-year period — making Medicine Hat the first Canadian city to monitor all of the aging pipe assets in their metropolitan area using permanent leak detection technology.